The primary scope of this project was to build a decorative façade and sunscreen that could also act as a pedestrian barrier for the new seven-level, 567-space parking building constructed as part of the $1.127 billion Royal North Shore Hospital ( RNSH) and Community Health Services Redevelopment.

After being approached by Thiess, Locker Group’s contribution led to a re-envisioned design utilising their AtmosphereTM façade system, in order to achieve greater installation efficiency and a more practical solution.

One of the factors contributing to the success of the RNSH project was the planning and design time available; Locker Group was able to work with the team to offer their insight and advice. Connecting with the construction firm in the early days of design and planning, Locker Group worked closely with, Thiess, to ensure all preliminary research and preparation was completed before construction began.

The Atmosphere façade system was chosen based on the simplicity of fixing the system and the resulting reduction of steelwork required. The design not only offers improvements in the installation times, but also provided the designer with more flexibility in terms of pattern and panel design while still meeting the open area requirements for a car park design.

When First approached, Locker Group demonstrated how the project would progress in significant detail. Locker Group showed Thiess relevant designs. Important engineering details and examples of completed projects, including a visit to the previous installation in Coffs Harbour. Locker Group also showed Thiess videos and timelines of exactly how the installation would proceed, meaning the team could put specific plans in place for the time the crew would be on site. They liked the designs so much that they altered the entire construction project to suit the Atmosphere TM façade.

From there, Locker Group and Thiess worked closely together to ensure the designs and plans were feasible and met all relevant standards and requirements. Because Locker Group had already completed a lot of product-related research and engineering, only the client-specific studies were left, meaning the time frame between design and application was more than sufficient. Locker Group and Thiess partnered in an exhaustive process beforehand to iron out most of the potential challenges and risks. They worked together to develop an overview of the support system, which enabled the project to be planned and prepared in incredible detail before installation.

The extensive planning combined with the simplicity of the Atmosphere stages meant the installation of the RNSH façade took just 10 days. Locker group’s Atmosphere façade was much lighter and faster to install than the original plans for the project, which meant Locker Group was easily able to deliver the finished project on time and on budget.

The project was completed quickly and efficiently due to the team having critical items in place and ready to go when needed, eliminating a lot of steel work and dealing with issues the moment they arose. There are always going to be challenges during a project of this size and scope, but the partnership minimised obstacles and, as a result, the project delivery was relatively painless.

Overall, Thiess and Locker Group are both happy with the outcome. Not only will this partnership likely lead to further work down the line, but Locker Group is pleased to have such a excellent example of their façade accessible to future clients in Sydney. 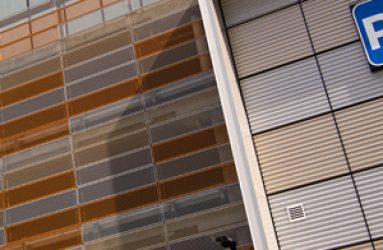