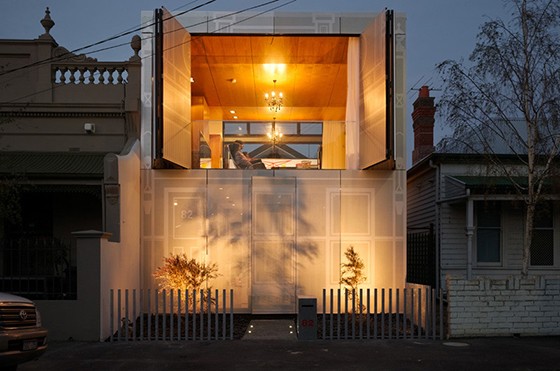 The designer saw this project as a platform to establish a critical dialogue within the built environment; to raise as many questions as it found solutions.

KUD architects challenged the idea that smaller inner city blocks cannot respond to complex contextual constraints such as orientation, sustainability and heritage restrictions. They utilised these constraints as areas of possibility and exploration for their design processes and discourse.

The strategy was to break down the elements of the Terrace house; to critique and respond.

The main areas of investigation during the design stage were symbolism and ornamentation, the public and private realm and redefining the boundaries between them, Solar Orientation, environmental sustainability and the programming of the plan. KUD Architects were interested in retaining the ‘idea’ and the symbolism’ of the terrace but re-evaluating the gesture to an ironic or even satirical level to engage in a public debate.

The panels had to be more than just fixed panels, they had to be operable. Locker Group worked closely with KUD to ensure their vision was fulfilled.

The built form is an urban infill within a very small 5.5 x 14.4M envelope. The perforated house was the response to establish an alternative language to the accepted notion of the culture in the area. This Pic-Perf® house has an anodised aluminum finish. Locker Group manufactured large sheets exceeding 3.00M in height and 1.2M in width to create the desired effect. This included 2 sheets installed as bi fold doors for the second level, which in itself provided some challenges, as the doors had to work independently, and in tandem with the bi-fold windows that are hidden within. The house incorporates passive sustainable interventions by orienting glass bi-fold doors to the north and louvers for cross ventilation as the primary means of cooling.