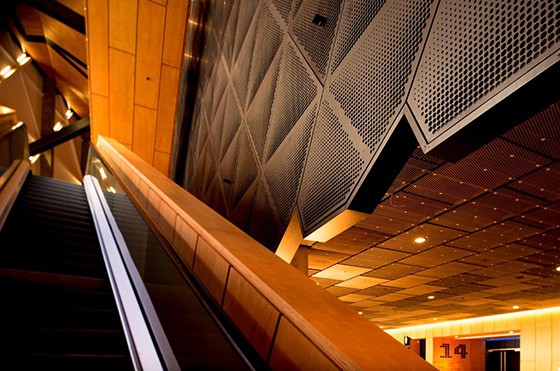 The design and construction of the Perth Arena is a striking architectural statement, and is likely to inspire redevelopment in the surrounding section of the CBD. Perth Arena now offers a premier venue to accommodate up to 15,500 patrons.

A joint venture between ARM Architecture and Cameron Chisolm Nicol, Locker Group worked closely with the design team in order to understand their vision for a striking, dramatic interior. The interior of the facility includes four freestanding bars, five function areas and seven concessions. The different areas of the interior express individual colours and textures. Locker Group produced the internal feature wall, which provides the first impression to patrons as they come in the main entrance. The feature wall was intended to have a textural appearance that represented a quilted finish.

In addition, Locker Group was involved in specification of the anti-climb security fence, which was to envelope the goods area. The security fence covers approx 1000 m2 of both perforated and plain, unperforated panels.

The internal feature wall incorporated Pic Perf™, not as a traditional photo image or logo, but as a textural element. The perforations were designed to replicate the voluptuous image of warm quilt, and the black anodised aluminium contrasts beautifully with the warm timber panelling.

Locker Group kept in close contact with the installation team, Denmac, as each perforated panel, was a discreet shape, not a rectangle among them. Each panel was either raked or angled, and Locker group supplied every one fully finished and ready for installation.

The new Perth Arena is a spectacular and daring architectural achievement; recognised as one of 7 shortlisted projects in the 2013 World Architecture Festival awards. The West Australian Premier, Colin Barnett noted “This is an iconic venue for Perth… the Arena is a work of art.”

Locker Group is immensely proud to be associated with such a significant moment in Perth’s evolving architectural landscape.

The feature wall in the main concourse provides a visual drawcard and provides its desired texture and contrast. The external security fence surrounding the goods despatch area is further insight in to the design brief and architectural language of this imposing new structure.