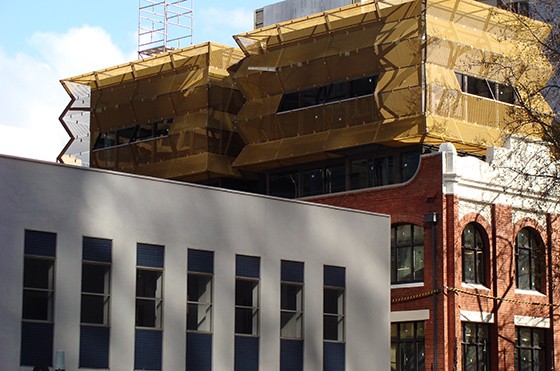 SJB Architects designed a canopy for the refurbishment of this heritage building, with the requirement of high visibility as an important factor. The original design was to consist of a mixed arrangement of small and large aperture woven panels manufactured in Brass. It was to be robust, yet fine enough to allow high visibility.

With this brief in mind, Kubic Constructions set out to create the structure. Ronstan were called on to provide a minimal framework solution, which resulted in a tensioned cable system. Locker Group worked closely with SJB, providing samples to add physicality to the design at concept stage. As the project evolved, it became clear that a singular aperture design would create a more consistent visual aesthetic. The logistics of the project also posed a concern in its creation. Using Brass was going to be difficult, given the complexity of the installation process. With this in mind, Locker Group was able to create the perfect solution, without compromising the design requirements.

The final specification was for Locker Group’s Boston 743A, a square woven mesh with a 17mm Aperture made from 4mm Diameter Wire The simplicity of the specified Boston 743A produces high open area; an integral feature of the design element, to produce an open space with structural integrity. Probably the most exciting feature of this project however, was that the mesh was produced in Aluminium, a first for Locker Group on this scale. Combined with a gold anodised finish from AAF, the mesh gives the appearance of a brass mesh, without weight issues, providing ease in handling and installation. The material was produced into a panelised system, integrated with sliding windows, resulting in a triumph of design and construction, and a crowning achievement to the site.