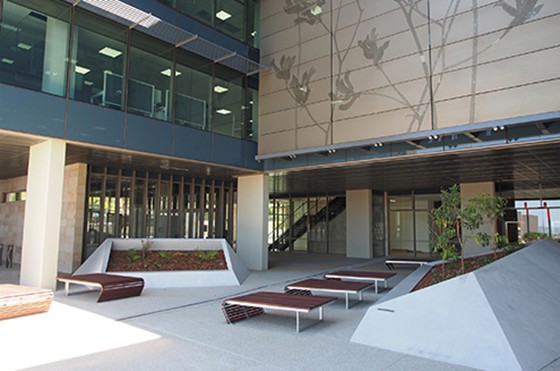 In redesigning its headquarters, the Western Australia Local Government Association (WALGA) had quite a few specific requirements it needed to meet.

The design had to be attractive.

It had to be environmentally responsible.

And it had to reflect the particular local flavour of Western Australia.

So when the architects were tasked with realising this vision, they knew who to call. Locker Group’s range of architectural products, its access to locally sourced material and its decades of experience and expertise meant they could supply and install the facade of the building that would fit all of these needs.

It’s no secret that WALGA has a focus on environmental sustainability. From its “That’s Rubbish” recycling campaign, launched during National Recycling Week, to its emphasis on the environment and waste management in its overall policy plan, WALGA is focused on creating environmentally conscious local government areas.

So it was a no-brainer that when it made its new headquarters in West Leederville, the building would reflect these values. Locker Group’s Atmosphere facade played a key role in achieving this.

Atmosphere is a unique facade system that uses Ronstan tension stainless steeled cables and folded perforated panels to create an easily installed, energy-conserving building exterior that is both attractive and functional.

According to Mr Stringer, Atmosphere has the ability to reduce the amount of heat hitting any given building by up to 78 per cent. And by giving shadowing and shading to the building’s interior, its overall energy consumption also drops, as less air conditioning is needed to keep it cool under the beating Western Australian sun.

Locker Group’s work paid off in the end. The WALGA office was ultimately given a Five Star Green Star rating for “Australian excellence” in sustainable design, according to the official WALGA website.

The benefits of Pic Perf

Working in concert with the Atmosphere was Locker Group’s Pic Perf, which allows any image to be created in perforated metal. This can be anything from a brand or a logo to a photograph or an abstract artwork.

“It’s more of a feature than your normal standard perforations or your typical façade,” explained Mr Stringer.

To reflect the unique local characteristics of Western Australia, WALGA elected to have the Kangaroo Paw, a local plant of the Wildflower State, recreated on the building’s facade.

Atmosphere and Pic Perf are easy to install

What differentiates Atmosphere from traditional facades is the fact that it’s fixed onto tensioned cables, rather than being a secondary steelwork structure, making the initial installation process relatively easy.

In fact, the only challenge the Locker Group team ran into when fitting it onto the WALGA office was the weather. The C-shaped installation area was “a bit of a vortex for the wind”, said Mr Stringer, which made labouring on an elevated working platform or boom lift particularly tricky. Care was therefore of the utmost importance.

This is much the same with Pic Perf. Because you can simply remove the individual panels and reassemble new ones on the vertical cables, it allows for endless re-branding opportunities – so if WALGA ever want to replace the Kangaroo Paw with another classic Western Australian symbol in some years time, it will be easy and affordable.

When the Western Australian Local Government Association needed an energy-saving and decorative facade for their new headquarters, they called Locker Group.